The North Pole Where better to test a dive watch called the ‘Caribbean’? In the summer of 1966 an Italian exploration team, led by award-winning underwater photographer Roberto Dei, embarked on an expedition to the North Pole. The purpose of the expedition was essentially divided into two parts:

1. To study the physical effects on a diver submersed in less than zero-degree water. To photograph everything encountered under the ice pack. To test the suitability of standard production diving equipment for use in glacial waters.

2. To observe and photograph Polar bears and seals in their natural environment. The Ollech & Wajs ‘Precision Caribbean 1000’ was selected as the official expedition watch. This was more than just a prestigious honour — the watch would be subject to a gruelling program of sub-zero tests. In the absence of a backup watch, the expeditionists were relying on the OW Caribbean 1000 to perform well. 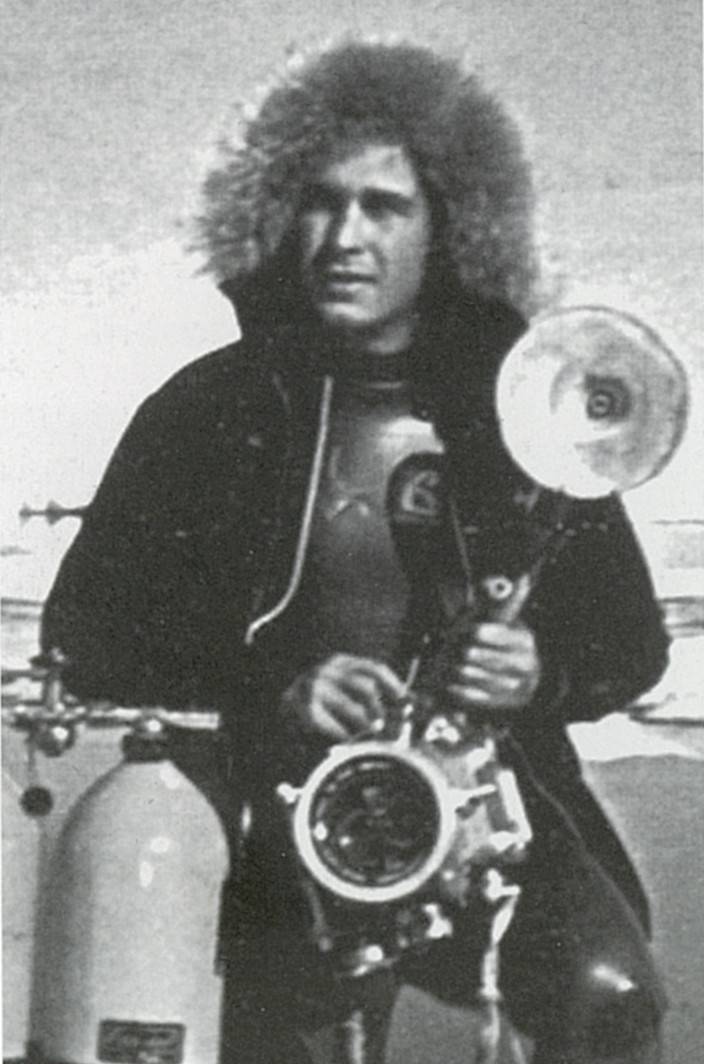 Roberto Dei is considered a forefather of underwater photography. Throughout the 60s and 70s, his award-winning images gave people a portal into the unseen world beneath the ocean’s surface, from macro shots of sea worms to dramatic images of tiger sharks locked in mortal combat.

Dei had dived in the Mediterranean in winter, and in the frigid lakes of Northern Italy, but nothing had prepared him for the bitter conditions he would encounter in the Arctic.

The expedition made steady progress aboard an icebreaker, at around the same latitude as that of the explorers and scientists whose legendary conquests of the North Pole had preceded them. On the journey there, Dei read, cover to cover, the US Navy Polar Manual. He noted protocol 26 with particular trepidation, due to the amount of metallic equipment on board, including his two large Rolleimarin cameras: "Never touch cold metals with bare and wet hands. If you inadvertently touch a metal surface with one hand and cannot remove it, immediately urinate on the metal to warm it and you will save an inch of skin. If both hands are glued to the metal, hope to have a friend with you.”

Testing a commercial dive watch in the Arctic may seem a little extreme, considering how unlikely it was that any diver would ordinarily be exposed to such low temperatures. However, when a dive watch has ‘1000 METERS’ on its dial, it has to be waterproof to 1,000 metres, whatever the reading on the thermometer.

Extreme temperature changes can effect a watch temporarily and permanently in several ways. Heat and cold make materials expand and contract. If the properties of the case, the gaskets or the lubricant are altered significantly, the watch’s water resistance and performance could be compromised. The movement has components made from various materials, which have different thermal expansion and contraction rates. Changes in the characteristics of the parts’ materials will adversely affect the efficiency of the movement, which is most likely to manifest in a loss of accuracy.

It’s not known for certain why the watch was called ‘Caribbean’. The most likely explanation is, with the growing popularity of recreational diving in the early 1960s, that the name was conceived with marketing firmly in mind. ‘Caribbean’ conjures up aspirational images of idyllic turquoise waters over wrecks of old galleons, teeming with fish of every colour imaginable.

Taken from an OW catalogue circa 1968

As the Italian photographer tentatively lowered himself into the ink-black, ice-cold water, the irony of the watch’s name was not lost on him. At that precise moment, however, he was more concerned about the effect the cold water was about to have on his own internal components than on those of the watch. According to some American scholars, a man wearing normal clothes, who had the misfortune of falling into the Arctic Ocean, would survive for no longer than 90 seconds. It remained to be established how long a man wearing two 5mm neoprene wet suits would last. Dei hoped he wasn’t about to provide science with the answer.

He wasn’t surprised by how dark it was beneath the ice. In some places, the pack was up to 6 metres thick and acted like a giant blackout curtain. However, where the crust was thinner or almost dissolved, the sun’s rays penetrated the water, which Dei likened to "shards of light flooding into a beautiful cathedral".

The reliability of the Caribbean 1000 would be vital during the Artic experiments. Not only would divers have to keep their eyes on how long they’d been under water, in sub-zero temperatures they had to know exactly how long they’d been in the water. 28 minutes was the agreed absolute limit, any longer, and the diver risked paresis, frostbite, or — worst case scenario — hydrocution.

After 20 minutes in the water, Dei could no longer feel his hands or feet and was suffering excruciating pain in a molar. The same tooth had caused some discomfort a week earlier, while he was eating a gelato in Rome, but this time the pain was unbearable. He put his hand to his cheek and realised it was completely numb, being the only part of his skin that was not protected by neoprene. It was time to end this initial dive. The cold was not the only thing that posed a danger to the expeditionists. Polar bears were a constant threat, and many experiments had to be abandoned or relocated due to their proximity. Divers were particularly vulnerable when entering or exiting the water; in their shiny, black wetsuits, they resembled seals — the bears’ primary food source. Dei even described seeing bears above the ice pack while he was under the water. They were peering down through the ice toward the divers, seemingly aware that something edible was beneath. Orcas were known to venture under the ice pack in search of a meal, and they too could easily mistake divers for seals. The dive team were also warned about a type of seal weighing between 300 and 400kg — the ‘storkobbe’. Tromsø hunters told of storkobbe seals biting into the hind legs of swimming adult polar bears and pulling them down twenty or thirty metres to their deaths.

Both Diver and assistant were vulnerable to bear attacks when entering and exiting the ocean (CREDIT: MONDO SOMMERSO 1966)

It wasn’t only during dives that the Caribbean 1000 proved its worth on the expedition. At the 78th parallel, during summer months, there are 24 hours of continuous sunlight. Night and day soon became an abstract concept, and the team used the 12-hour bezels on their watches to keep track of their sleep/wake cycles.

Dei returned from the North Pole in August, with the most remarkable collection of wild polar bear images the world had ever seen. His underwater shots revealed for the first time the strange and eerie landscape hidden under the Arctic’s frozen crust. For OW, the most interesting material Dei bought back was the precious data, methodically logged in a daily journal, detailing how the Caribbean had performed in one of the coldest place on earth.

Having survived the arctic expedition (both watch and diver), a year later the same OW Caribbean 1000 would accompany Roberto Dei on an expedition to the Red Sea, to undergo testing in one of the world’s warmest diving environments. That’s a story for another day, save to say that both expedition teams expressed their complete satisfaction with the excellent performance of all the OW Caribbean 1000 watches.